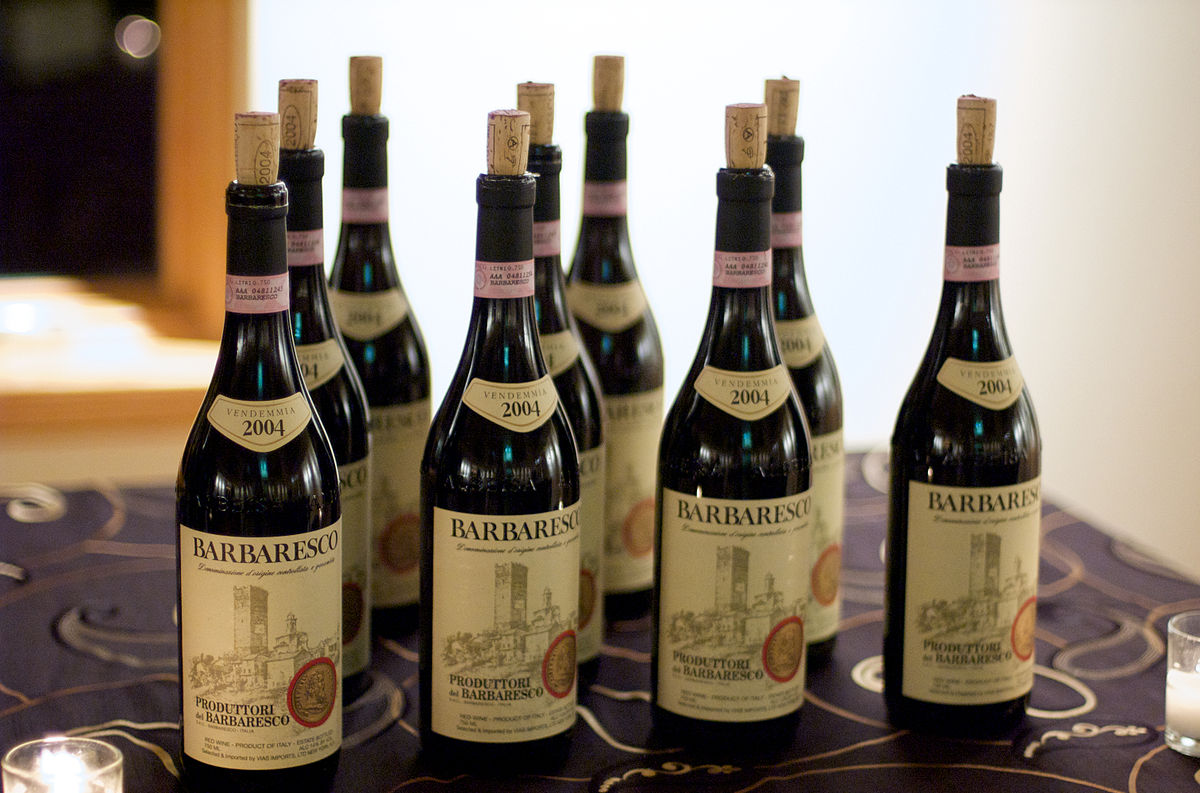 This wine, together with Barolo, can be included among the great wines of the Piedmont Region and Italian production. The ancient hamlet, with the same name, stands on the top of a hill near Alba, in the Cuneo Province, considered, since the times of the Roman Empire, to be the perfect place to observe and catch sight of possible enemy attacks.

The production of this DOCG wine is like a magnificent prince, an amazing variation of the Nebbiolo grapes. It first appeared on a document dated 4th November 1799 when, after the defeat of the Austrian army on the plain of Genola, General De Melas ordered the town of Barbaresco “to have brought to the base camp in Bra a carrà (local truck-borne barrel of 493 litres) of excellent Nebbiolo”. But the one and only alma mater of this wine was Domizio Cavazza, director of
the Royal School of Enology in Alba, who at the end of 1800 gave more value to the Barbaresco production with the purchase of the Castle of Barbaresco and the founding of the “Cantine Sociali”, i.e. cooperatives which gathered together the owners of local vineyards. In 1894, thanks to its important contribution, the wine making techniques were improved, bringing Barbaresco to be placed aside and presented together with the already famous Barolo.

Later, in 1899, Barbaresco also entered the political scene thanks to Teobaldo Calissano, a member of the Italian parliament, who presented the first bill to “protect the true Barolo and Barbaresco wines” against fraud and counterfeiting. This was certainly one of the first actions in Italy to protect wine with laws ten years after the introduction in Bordeaux of the first official classification of quality wines.

After that, in 1947, the first Consortium for the Protection of Barolo and Barbaresco was established and in 1963, with law n. 930, the Designations of Origin were finally established as well as the exact role of the Wine associations. In this case, the Consortium worked in order to obtain the recognition of the DOC and DOCG labels which for Barbaresco arrived respectively in 1966 and 1981.

Meanwhile, an important moment for this Prince of Langhe came in 1958, with the constitution of the Cantina Sociale, a Wine cellar gathering different Barbaresco Producers, which became a symbol of rebirth for the area after the two world wars. It was once more Domizio Cavazza, who ended its work by assembling together 19 wine growers (today it is 63) who approached and worked hard with the wine making techniques in order to produce only the Barbaresco wine.

The production regulations envisages that Barbaresco must be subject to an aging period of at least two years and left to rest for at least one year in oak or chestnut casks. If aged a period of at least four years, Barbaresco can be labelled as “Riserva” and the bottles where it can be kept must always have the Albeisa shape as the traditional bottle invented in early 1700.

Barbaresco is a wine which has marked the History of Langhe and of the consumptions of the many food lovers of this area. It is capable of providing exciting feelings and can surprise with its complexity.

The area where Barbaresco is allowed to be produced is quite limited: the surface covered with vineyards extends only for 690 hectares in the municipalities of Barbaresco, Neive, Treiso and part of San Rocco Seno d’Elvio, a little hamlet near Alba. As for Barolo, and its younger brother Barbaresco, the fields express, in an univocal way, gentle poems made of structured verses if “produced” in Treiso, more refined poetry if coming from Neive, and verse that is long-lived and with a full body if coming from the municipality of Barbaresco.

Already beautiful and genuine because of its colour, which is garnet-red, typical of the vine variety it comes from, it tends towards orange with age. The bouquet is made of fruity perfumes of the red fruit jams, with floral hints of violets. The passage into the barrique, enriches it with spices, walnut husk, leather and tobacco, without forgetting liquorice and cocoa, which brilliantly mark the olfactory experience.

In the mouth, it is possible to appreciate the entire prestigiousness given by the refining period. The Nebbiolo vine variety, in these lands, stands out in a dry taste, but remaining always velvety and harmonious. When tasted, the softness is the protagonist which, together with the tannins, allows space for a noble roundness.

This great product of the Piedmontese tradition can be perfectly paired with traditional dishes prepared with red meat, rich in perfumes and flavours, enhanced with the famous White Truffle from Alba and porcino mushrooms. Wine lovers will also appreciate matching it with dishes prepared with game, poultry, braised beef and seasoned cheeses such as toma or pecorino cheeses.