On Wednesday 26th June there was huge participation for the Swiss leg of Barolo & Friends organized by the Consortium “i Vini del Piemonte” in cooperation with Consorzio di Tutela Barolo Barbaresco Alba Langhe e Roero, which has amazed Zurich’s public with an exclusive and experiencing event. 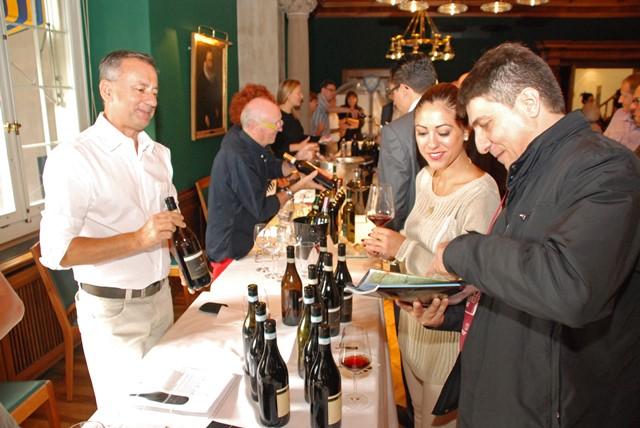 Some 350 participants have joined Barolo & Friends of Zurich, which counted, besides the great number of winelovers, many operators of the sector, restaurateurs and journalists.

Even if this is one of the few paying events in a field where there are a lot of promotional activities related to the food and wine sector at an international level, the public have answered positively: the exclusive frame of the Grosser Zunftsaal, the elegant hall of the Zunfthaus zur Saffran, from whose big window you can admire the wonderful palaces of the centre of Zurich, has helped in highlighting the uniqueness of this event. Unlike a simple tasting, the event has given the opportunity for an engaging and fascinating experience in strict contact with the world of flavours and the wine and food culture of Switzerland and Italy.

During the “Walking tasting”, which took place from 5.00pm to 9.00pm, participants could personally meet the producers, tasting the best Piedmontese DOC and DOCG wines and food products carefully picked up by Slow Food Switzerland and some selected Italian shops.

The two seminars, which could be joined by paying an extra ticket on the entrance ticket, have also had an amazing appreciation: all the available seats where sold out both for the “vertical” tasting of Barbaresco, and for the laboratory Piedmont Wine&Food Moments.

Before the beginning of the event, the municipality cellar of the Barbaresco Producers organized a tasting of Barbaresco of the Moccagatta Cru, with a wide overview on 10 vintages selected between 1985 and 2009, which amazed all the attendees.

Perfectly led by the oenologist Maurizio Rosso, from the cellar Gigi Rosso, and Mauro Catania, representative of Slow Food Switzerland, the laboratory Piedmont Wine&Food Moments has offered the participants the extraordinary possibility to taste the great Piedmontese wines matched with food of Slow Food presidia. «The enthusiasm of this public has hit me– says Maurizio Rosso –: they were all sincerely interested, there has been a lot of interaction and, at the end of the laboratory, they thanked us. I think that this kind of initiative is useful especially to underline the friendship that ties us with the places that we visit: in every country there are excellent productions and we do not go abroad just to talk about our wines, but we also want to learn about the other countries’ delicacies. And this is also the real aim of Barolo & Friends: creating interest around Barolo and the other wines, but also around local productions which can be found around the world. When you export goods abroad, it is very important to consider if you can involve other players: we have wine, what can it be matched with? Why not with the cheeses produced by the Slow Food presidia, for example?».

The spirit of cooperation has played an important role in the success of the entire event. This means that, according to the Barolo & Friends tradition, several partners and “friends of Barolo” have joined the organization, among those: the Italian Chamber of Commerce for Switzerland, Slow Food Switzerland, Produttori Moscato d’Asti Associati, Tuttoitalia.ch and the prestigious Vinum magazine.